The morning after Russell Kirk died in 1994, John Engler visited the Kirk family in rural Michigan. He was not only a governor who wanted to pay his respects to one of his state’s most notable writers and thinkers, but also a longtime friend who had represented the Kirks’ district in Lansing as a state legislator. “What are you going to do?” he asked Annette, a widow at the age of 54. She hadn’t made any plans for her future, but she blurted out an answer: “I want to stay here.”

Nearly a quarter century later, Annette remains right where she said she wanted to be, in the ancestral Kirk home, known as Piety Hill, in Mecosta, a town with fewer than 500 residents. She has lived there without interruption since 1964, when she married Russell, who was more than two decades older than she and already well established as a leading conservative intellectual. Today, during Russell’s centennial year — he was born on October 19, 1918 — she has been a widow for almost as long as she was a wife, but she is no less devoted: “My aim and mission in life is to promulgate his thought.”

This fall, conservatives are celebrating Kirk’s legacy with everything from Russell Kirk Day in his birthplace of Plymouth, Mich., to symposia and conferences at think tanks in Washington, D.C., at Belmont Abbey College in North Carolina, and elsewhere. On November 13, National Review Institute will host its own “Kirk at 100” panel discussion in New York City, honoring a man who was a National Review columnist for the magazine’s first 25 years, after William F. Buckley Jr. personally recruited him for the job.

Yet Kirk is nowhere more alive than he is in Mecosta, where Annette has turned the Russell Kirk Center into a vibrant outpost of conservatism. “We’re all about the ‘permanent things’ here,” she says, referring to a term invented by T. S. Eliot and embraced by Russell to describe the rules and ideas that sustain civilization. She keeps on proving the truth of something Buckley said long ago: “There can’t ever have been a case in which a widow emerged more competent to carry on her husband’s work than Annette Kirk.”

The 78-year-old Annette Courtemanche Kirk has earned a reputation for fast-talking conversation and boundless energy — and on the day I visited her in August, she hosted me nonstop for eight hours and seemed ready for more, even as we bid farewell. If she never had met her husband, she probably would have become at least a footnote in conservative-movement history anyway: In 1960, she was one of the few women to attend a meeting of young conservatives at Buckley’s home in Sharon, Conn. They produced the Sharon Statement, a 400-word declaration of principles that animated activists as they started to rally around Barry Goldwater and his presidential aspirations. “I typed it up,” she says.

Annette knew of Russell be­fore she encountered him. In 1953 he had published The Conservative Mind, his most influential book. “Every conservative was reading it,” she says. At a time when many liberals claimed that there was no such thing as a conservative intellectual legacy in U.S. politics, Kirk aimed to show otherwise, with an idiosyncratic history of an Anglo-American tradition whose story started with Edmund Burke and continued through the likes of John Adams, John Marshall, and Nathaniel Hawthorne. It inspired a generation of young conservatives, many of whom had taken to calling themselves “individualists.” Kirk arguably gave conservatives their name.

Annette and Russell met at a conference in 1960. She was a college student and they sat together at lunch. “He was charming and shy,” she says. “But soon I learned that we were kindred spirits.” They exchanged letters and visits. Finally, they married in 1964. On the way to the airport for their honeymoon on Michigan’s Beaver Island, they traveled in a Rolls-Royce Phantom II hearse. It bore a “Goldwater for Presi­dent” bumper sticker. “We believed in the same things,” says Annette.

Russell rejected a comfortable career in academia, preferring instead to live in Mecosta, a remote town where his ancestors had built a country home. Today, it’s a quirky Italianate structure, with red-brick walls, a tower-like entryway, and a cupola. On the inside, spacious rooms integrate items salvaged from an old church. Kirk usually worked down the street, in a building that he had converted into an office and library. He continued to write books, including The Roots of American Order and a well-received biography of Eliot. In addition to his column for National Re­view, he penned five columns per week for a newspaper syndicate. He also wrote fiction, including ghost stories and The Old House of Fear, a Gothic novel that was his best-selling book. These projects brought in a little money, but the Kirks never were wealthy — and Russell earned most of his income from speaking fees and temporary teaching assignments.

As Russell scribbled away, often through the night, Annette managed their home, which she and Russell filled with four daughters. The Kirks became famous for their hospitality, taking in refugees from Eastern Europe, Ethiopia, and Vietnam. The Kirks also welcomed hundreds of scholars and thousands of students. That’s how I met them in 1990, at a weekend seminar for college students on the thought of Burke. Russell expounded on the importance of tradition and signed my copy of The Conservative Mind; Annette tended to our food and accommodations, impressing everyone with her warmth and generosity. If Russell was the reason people wanted to visit Piety Hill, Annette often was the reason they wanted to return.

Russell’s death put a stop to his productivity, but not to Annette’s. In 1995 she founded the Russell Kirk Center for Cultural Renewal and kept on encouraging visitors to come. Although nobody has kept precise numbers, Jeffrey O. Nelson, who married a Kirk daughter and is now the vice chairman of the center, estimates that since the 1970s more than 5,600 students have attended programs at Piety Hill and about 400 scholars have lived there in residence. They can take advantage of a 12,000-volume library and stay in one of several cottages.

Ryan Streeter first heard about Piety Hill from Mike Pence, back when the vice president was an Indiana radio talk-show host who had not yet won his first political office. “I was just a college student,” Streeter says. “He called Annette and told her about me, which led to an invitation to visit with other students for three days.” That was in 1993. Five years later, Streeter, who is now the director of domestic-policy studies at the American Enterprise Institute, was struggling to write his doctoral dissertation. So he arranged to spend the fall in Mecosta as one of the Kirk Center’s resident fellows. “I was completely unplugged,” he says. “It was the perfect setting for a scholarly endeavor.” Today alumni work all over, even at the Uni­versity of Moscow.

In addition to the programs, Annette has kept Russell’s work in print. “I want to make sure that people still have access to what he wrote,” she says. She cooperated with Bradley J. Birzer on his definitive biography of Kirk, re­leased in 2015. She invited James E. Person Jr. to edit a volume of his correspondence, which she keeps in an archival room. This led to the publication earlier this year of Imaginative Conservatism: The Letters of Russell Kirk. She also has promoted translations. Recently Kirk’s books have appeared in several languages, including Japanese and Portuguese (for a Brazilian im­print). This year, a new edition of The Conservative Mind has sold more than 4,500 copies in South Korea. Annette says that Chinese and Turkish editions are in the works, too. The center also publishes the University Bookman, a magazine founded by Kirk in 1960 and continuing today as an online publication edited by Gerald J. Russello, plus Studies in Burke and His Time, an aca­demic journal. Future projects could include e-books and audiobooks and a collection of Kirk’s newspaper columns. “There’s so much more we can do,” she says.

It’s now possible to visit Piety Hill vicariously, via a website that shows views of the house and grounds from a drone camera. Yet students continue to seek an authentic experience, making their pilgrimages to the home. This school year, Annette expects to entertain groups from Hillsdale College, Hope College, and the University of Louisville. Those who wait a year may see something new: In 2019, the state of Michigan will pay its own tribute to Kirk’s life and legacy by placing a roadside historical marker near the house.

Russell Kirk may be history, but be­cause of Annette, he’s also got a future. 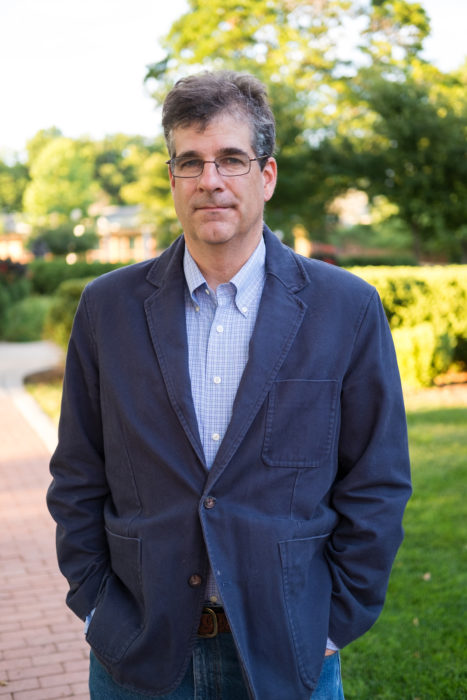