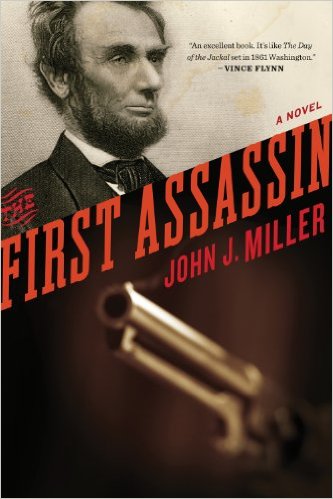 Washington, D.C., 1861: A new president takes office, a nation begins to break apart—and Colonel Charles Rook must risk insubordination to stop a mysterious assassin who prowls a nervous city. He will need the help of an ally he does not even know he has: Portia, a beautiful slave who holds a vital clue, hundreds of miles away.

Winter 1861: the United States teeters on the brink of civil war. In Washington, D.C., Colonel Charles P. Rook is tapped to organize the district’s security and to protect president-elect Abraham Lincoln from the death threats pouring in to the White House. He surrounds the president with bodyguards and fills the city’s rooftops with sharpshooters, diligently investigating the conspiracies being fomented with increasing intensity by Southern secessionists. Yet amidst the chaos and confusion, a foreigner slips unnoticed into the teeming city. Hired by a wealthy Southern planter to eliminate President Lincoln and destroy the Union once and for all, the assassin catches Rook’s attention by cutting down anyone who gets in his way. As the bodies begin to pile up, Rook realizes he is caught in a dangerous game of cat-and-mouse with a cold-blooded killer who will stop at nothing to complete his mission. Rook’s only hope is Portia, a runaway slave who holds the key to the assassin’s identity—if she can stay alive long enough to deliver it. Packed with dynamic characters, rich period detail, and a chillingly sinister villain, The First Assassin is a riveting thriller for fans of historical fiction.

Question: What initially inspired you to write The First Assassin?

John J. Miller: I’m a fan of thrillers and wanted to try to write one. The backdrop of Washington, D.C. in 1861, just as the Civil War was getting underway, seemed like an excellent setting for the right kind of plot. Once I had the idea for a story about a mysterious hitman who tries to murder Abraham Lincoln at the start of his presidency, The First Assassin became a book that I was determined to write.

Question: What other authors or books have influenced your writing?

Question: Your fellow author Robert Ferrigno has proclaimed that “there’s not a false note in the whole book.” What kind of research did you do ensure historical accuracy in your historical novel?

John J. Miller: I’m a Civil War buff who grew up reading my fellow Michigan native Bruce Catton as well as many other historians. That experience provided a lot of background knowledge that’s just warehoused in my head. To write The First Assassin, however, I had to learn a lot of specifics. I made regular treks to the Library of Congress which, for many years, was right across the street from my office. What did the White House look like in 1861? Where was Washington’s seediest neighborhood? How did ordinary people respond to the fall of Fort Sumter? There are answers to all of these questions and I tracked them down in half-forgotten books and old newspapers on microfilm. My goal was to tell an exciting story that’s fictional–but one that also feels authentic, true to its time and place.

Question: Is there a character in the book you most identify with or admire? Why?

John J. Miller: I like Colonel Rook, the main protagonist. He’s charged with presidential security. He’s a Union man but not a Lincoln man–he didn’t vote for Abe and has some questions about whether this prairie lawyer is the leader America needs at its moment of crisis. He also knows his duty and he’s willing to risk insubordination to perform it.

Question: You’re also a respected nonfiction writer. What prompted your foray into fiction?

John J. Miller: I’m a fan of the form–an old English major who secretly wanted to write an entertaining thriller, even as I was trying to build a career as a journalist. When the idea of The First Assassin came to me, I couldn’t resist.

Question: How does this book compare to your previous books?

John J. Miller: The obvious difference is that it’s fiction. But there’s an important similarity as well: it dives into American history and tries to bring the past to life.

Question: In your “day job” you write for the Wall Street Journal and National Review. Have you always wanted to write? What other careers have you pursued?

John J. Miller: I think so. I certainly enjoyed it as a kid. I worked on newspapers in high school and college. Several potential career paths have presented themselves to me, but I’ve always come back to writing. A few years ago, I spoke about the writing life at a middle school career day–and then turned my remarks into a short article.

Question: What’s next for you?

John J. Miller: My next book is a return to nonfiction. The Big Scrum: How Theodore Roosevelt Saved Football is scheduled for publication in 2011. Beyond that, I have an idea for a sequel to The First Assassin–a stand-alone story that will take several of the characters deeper into the Civil War.

An excellent book—it’s like The Day of the Jackal set in 1861 Washington.

The story moves with swift suspense, but Miller’s real achievement is to take us inside a mindset nearly lost to time, and to create identifiable, sympathetic characters on all sides, including those who are willing to do murder to preserve the Confederacy and its ‘peculiar institution.’

Packed with fascinating information, superb characters, and sublime plot twists, The First Assassin is one of the most exciting thrillers I have read in a long, long time. This is historical fiction at its best and John J. Miller is the hot new author everyone will be talking about.

The First Assassin knocked me out. Utterly compelling, the novel sweeps the reader along multiple storylines which converge at one point, one moment, where history pivots on its axis. A skilled writer of non-fiction, here Miller uses his knowledge and research to create a powerful thriller that is completely believable. With its accurate period details and pitch-perfect characters—from house slaves to Washington, D.C. careerists to a mysterious hitman—there’s not a false note in the whole book. Read it and tell me I’m wrong.